The Rising Popularity of Skateboarding Shoes

More than any other type of sports shoe, skateboarding shoes are no longer used purely for their original purpose. Yes, skateboarding itself is still popular, and more so with every passing year. But skateboarding shoes have become even more popular than the sport they were designed to serve. You don't have to be a skateboarder to wear skate shoes--in fact, you may never have been near a skateboard in your life. You do need to know a thing or two about how to wear them and what to wear them with, though. 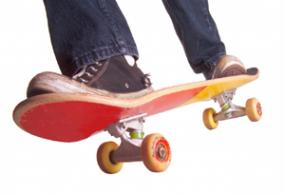 What do skateboarding shoes look like? Well, they should have a thick, flat sole, important so a skater can feel the board beneath his or her feet. They should have an oversized tongue, which helps protect the foot from injury. Other than that, anything goes.Skate shoes are now being manufactured as much for style as for skating, so no matter what color or look you want to go for with your shoes, chances are you'll find a skate shoe to fit. Classic brands such as Vans have been leading the way in skate shoe style for many years now. They have moved with the times to produce footwear which is as fashionable as it is functional.

These days, newer brands such as Osiris and Globe are helping keep the market fresh, with a steady stream of new styles designed to keep skate fans happy. Their other goal is to attract new wearers who don't necessarily have an interest in the sport at all.

How to Wear Them

If you're wearing your skate shoes for sport, your first thought should be for safety. Try the shoes out on your board and make sure that the fit well, and allow you to do everything you'll need them to do.

If you're simply interested in wearing skate shoes as a fashion statement, it's time to think about how the shoes will mesh with the rest of your look. Skate shoes are ultimately a casual look, which means they'll look best as part of a similarly casual style. Jeans, shorts and combat pants all look good with skate shoes. Dresses and skirts aren't out of the question either if you'd prefer to go for a more feminine look.

Look to stars such as Avril Lavinge and Gwen Stefani for style inspiration: both are big fans of skate shoes, and have made them an integral part of a style that's all their own.

Unlike most other types of Athletic Shoes, you won't need to go to a specialist store to buy your skateboarding shoes. If you're planning to wear them for skating, it's probably a good idea to go to one anyway. Otherwise, you'll find skateboarding shoes at online stores such as: