Accessories complete the outfit, and nothing gives more confidence than a pair of great shoes. Designer shoes are often intricately designed and made with good quality materials, and usually have a price tag to match.

What Makes a Shoe Designer?

Designer shoes often cost from $400 to more than $1,000, making them pricey wardrobe investments. However, they differ from cheaper shoes in a number of ways: 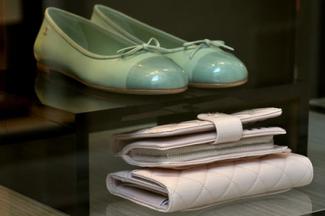 Chanel is known the world over for their attention to detail and beautiful leather accessories. They are known especially for their quilted ballet flats and cap-toe ballet flats, which cost upwards of $600 and are frequently adorned with the Chanel logo. A favorite of style stars Audrey Hepburn, Olivia Palermo, and Alexa Chung, Chanel ballerina flats are perfect for everyday wear. 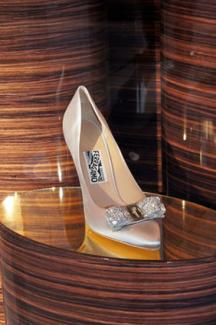 Salvatore Ferragamo was an Italian shoemaker, and made his first pair of shoes when he was nine (for his sister's confirmation ceremony, no less). He worked with Hollywood stars like Marilyn Monroe, Sophia Loren, and Katharine Hepburn, and was widely acclaimed as "shoemaker to the stars." Ferragamo even enrolled at the University of Southern California to study anatomy, which explains why Ferragamo shoes are some of the most comfortable designer shoes around. Ferragamo pioneered the use of the wedge heel and platform sole, but the brand is now known for their Vara shoe, a mid-heel pump adorned with a stiff, grosgrain ribbon. It currently retails for $450.

Red soles are Christian Louboutin's distinctive calling card, and one is hard pressed to find a celebrity who has not been seen in his shoes. Louboutins have topped the Luxury Institute's annual Luxury Brand Status Index for three years, winning the award of Most Prestigious Women's Shoes between 2007 and 2009. The Simple and Decollete pumps are classic shoes made from Napa or patent leather that would work well for the office (coming in at $625 a pop). Their evening collection changes every season and features embellishments like studs, feathers, and lace, with prices starting at $725 and running into the thousands.

Propelled to fame by Sarah Jessica Parker's character in Sex and the City, Manolo Blahnik pumps are the some of the most coveted office-appropriate shoes around. Launched during the '70s, when clunky platforms were highly popular, Blahnik chose to focus on the stiletto -- clean, simple lines with a slender heel. Even with designer collaborations with Calvin Klein, Issey Miyake, and John Galliano, Blahnik pumps have remained true to their original, classic style. They run between $400 and $800 at Nordstrom, Bergdorf Goodman, and Saks Fifth Avenue. 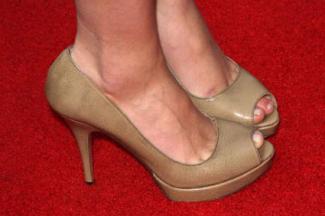 Sleek, beautiful, and classic in design, Prada - led by visionary Creative Director Miuccia Prada - consistently delivers on well-made and well-designed shoes for the every woman. Known for their simple pumps that fit perfectly in the office, Prada is also known for their on-trend section, where shoes are tastefully decorated with bows, buckles, and prints. They start at $400 for a sandal, and run to $1,250 for a more embellished heel.

Italian shoemaker Giuseppe Zanotti is known for his over-the-top shoes, luxe with rich detailing. His 2014 lineup includes gold-plated animals and bold buckles. He is known for his vertiginous sandals and sexy evening shoes. The line is carried at retailers like Barneys New York, Neiman Marcus, and Bergdorf Goodman. Shoes start at $695 and run up to $2,000.

Valentinos's Rockstud collection - pyramid-studded leather pumps and flats that embody the term "rocker chic" --put the storied house's footwear collection into the spotlight. Worn by celebrities like Emma Stone and Rashida Jones, and fashion-insiders Dree Hemmingway, Caroline Sieber, and Olivia Palermo, they came into prominence in the fall/winter 2012 season and have remained popular since. Flats start at $845 and pumps run to just over $1,000. 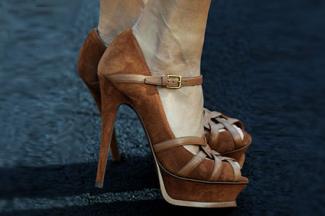 Saint Laurent (previously known as YSL) is best known for the "Tribute" shoe, which features a thick, hidden platform and an extremely skinny, tall heel. Launched in October 2007, the shoe has been called a "modern classic" and has been iterated in countless colors, fabrics, and designs. It is a perennial red carpet favorite, and starts at $875.

Sexy, glamorous, and confident are adjectives often used to describe the Jimmy Choo woman. Their evening shoes feature strappy sandals replete with luxe details and teetering heels, and even their closed-toe pumps offer a hint of sexiness with a notched backstay. They are sold at high-end department stores and prices range from just under $400 to over $1,000.

London-based Charlotte Olympia is synonymous with graphic designs, bold colors, and pop art-inspired designs. Their cat flats (complete with ears and whiskers) are a firm favorite of the quirky-cool crowd, including Alexa Chung. They start at $695, and run up to $1,200 for a blinged-out version.

Prada's sister brand, Miu Miu is led by Prada's visionary head designer Miuccia Prada. Miu Miu shoes are more whimsical, playful, and more intricately detailed than their cleaner Prada counterparts, and have become immensely collectible in recent years. Fans include Kirsten Dunst and Courtney Love. They are known especially for their fanciful peep-toe platform shoes (most famously, the swallow-printed shoe), which start from $695. 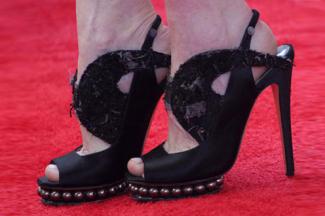 British designer Nicholas Kirkwood has trained at Central Saint Martins and under Philip Treacy, the notable hat designer. He's known for his statement shoes - footwear that incorporates architectural details and innovative materials like laser-cut leather and hand-printed suede. He has created catwalk shoes for fashion-forward brands such as Rodarte, John Rocha, and Erdem. He shoes start at $500 for a pair of sandals and run to $2,300 for Swarovski-embellished pumps.

Alexander McQueen's 12-inch armadillo heels - famously beloved by Lady Gaga and worn in her Bad Romance music video - is an exaggerated example of the brand's irreverence and artistry. They continually push the boundaries of footwear with elaborately-embellished shoes, but have added 'wearability' to their list of considerations under the deft hand of Sarah Burton, who took over the house after the untimely death of its eponymous founder. Their recent offerings include a horn heeled sandal and shoes with embroidered details. Shoes start at around $500 and go up to $1,200 for heeled boots.

Many of the shoes mentioned above are considered classics and rarely go on sale. However, if you're in the market for off-season colors and styles, or are willing to take a chance on the secondhand market, you can often find these designer shoes at vastly discounted prices (though still in the hundreds, of course!)

The best designer sales are:

For second-hand designer shoes, eBay is a treasure trove for bargain minded fashionistas, but must be navigated delicately as merchandise can be difficult to authenticate on the website. A more secure choice would be online consignment store, Fashionphile, which guarantees 100% authenticity and has two 'authenticity experts' on staff.